The waiting is over, so here we go with the first bunch of news for the 2011 Sziget Festival! Fans of hard and heavy get their own open-air Metal Main Stage, while some of the domestically well-known bands of the old continent get the chance to play at a brand new open-air venue called Europe Stage. The very first names suggest that organizers – besides inviting some big guns – decided to put a greater-than-ever emphasis on introducing new musical trends. The 19th edition of Sziget Festival welcomes fans from 10th to 15th August at the same exciting island in the middle of Budapest and for exactly the same price as last year!

Amongst the first names of the Pop-Rock Main Stage you get Pulp, coming back on stage after a long period of silence and already announcing that 2011 will see them playing only a few big festival gigs – including Sziget Festival, of course - in their classic line-up. Dizzee Rascal was chosen as the best male performer at last year's BRIT Awards, and this time all Sziget-fans will have the chance to see why. Main Stage will also host Chicago-based melodic hardcore act Rise Against, Californian rockers Smash Mouth and folk-punk icons Flogging Molly. Interpol is currently on tour with their new album and without any doubt they are going to be one of the most awaited bands of this year's Sziget Festival. The delicate, enchanting chamber-pop of The National has already fascinated the audience of the world's most important festivals, and it was definitely not by accident that they received the album of the year prize from Q magazine. Sziget-fans were crazy about Gogol Bordello, so we are more than happy to announce that they will return this year, while Chemical Brothers also promise a spectacular new show for 2011.

The newest venue of Sziget Festival is called Europe Stage, aiming to present bands from various parts of the Old World. These bands are typically very popular in their own countries, often filling arenas and stadiums, but not yet achieved break through on an international level. Sziget Festival does its best to open up gates for bands like Triggerfinger, often referred to as the Flemish AC/DC, or the Belgian Queens of the Stone Age, promoting their new album All This Dancin' Around. The Europe Stage also welcomes one of the most popular Italian alternative rock bands Verdena and make sure you get ready for S?hne Mannheims, German allstars formed of a dozen of outstanding musicians and covering a wide range of styles from r'n'b to reggae, rock, hiphop and pop.

World music fans get a five-day roundtrip of various genres and as usually, Sziget Festival’s World Music Main Stage will focus on the latest revelations and the biggest shots of the scene without geographical or stylistic limits. A fine example is AfroCubism, one of the greatest sensations of the past few months. We should also mention Cuba-based Eliades Ochoa and band, teaming up with Mali giants Kasse Mady Diabat?, Toumani Diabat?, Bassekou Kouyat? and Djelimady Tounkara to make an unforgettable show. The Argentine-Swiss-French combination of Gotan Project will once again present an undoubted skill in pushing the borders of tango, while the world music venue also offers a fine selection of Balkan music: Goran Bregovic will play beloved Romany anthems together with his remarkable Wedding And Funeral Band. A great news for fans of flamenco as well as hiphop is the gig of Barcelona-based Ojos de Brujo, playing at Sziget as an important station of their farewell tour. Rotfront from Berlin will try their best to be even more successful than they were last year… quite a challenge to say the least. And this is still just a prelude of happiness. France, a clear stronghold of folk- and world music will also have a firm representation with two beautiful bands. Old friends Les Hurlements d’L?o will create a special merge of the sensitivity of French chanson and ‘merciless’ punkrock, while Debout Sur Le Zinc will play the first Sziget show of their 12 years career, revealing their irresistible style of Celtic-Klezmer-tango-rock-gypsy-fusion.

The A38-WAN2 Stage has been offering a wide selection of trendy and cult bands year after year and this process goes on also in 2011. The venue will host Marina and the Diamonds, who is not only a fashion-dictator, but was also nominated for BRIT, BBC Sound and NME music awards, and has even received the prize of the best British/Irish band of the year at the MTV Europe Music Awards. Another great band playing on this stage will be Skunk Anansie, a band hard to label in terms of genre, playing an interesting merge of metal, reggae, electronics and post new-wave. And we should not forget about Hurts, flagship of contemporary British synthpop, awarded as best new band on the 2011 Shockwaves NME Awards.

The Party Arena is the place to be at nights if you are into dj's and partyculture in general. But even more than that: before the sun goes down this is also an exciting live act scene. Some of the artists playing here will include The Bloody Beetroots Death Crew 77, one of the most talented players of the electronic scene and new rave allstars Hadouken! Fans will also get the chance of listening to Crystal Castles, aiming at an audience that is open to visualize unknown and fantastic levels of musical existence. Those who have already seen them play live are captured by their sound and charisma forever. So make sure you arrive early to fit in the tent.

Sziget Festival has also a lot to offer for the fans of harder styles. This year organizers will make sure that rockers can get out of their well known tent and enjoy some fresh air with the introduction of the Metal Main Stage. The venue will present rock and metal acts in an open-air scenery with two international and two domestic stars playing each day. For this stage the focus is not necessarily on following the latest trends, rather on highlighting brutal guitar-riffs and some of the legends of the scene. The two early names announced suggest that this venue will be one of the most popular stages of the festival this year. Who are they? According to some fresh news, one of the most important metal bands of all times, Judas Priest is going on tour for the last time ever and they will definitely visit Sziget to make sure fans get stiff necks after a crazy night of headbanging. Mot?rhead will also return to Hungary, playing a thundering, high-speed, friendly and evil gig like they always did throughout the thirty-five years of their career. If you have ever seen them before, you already know that they simply ignore the age factor, so their live shows are as crazy and wild as the ones you get from musicians half of their age. Co-headliners playing at the venue will include Finnish power-metal heroes Sonata Arctica, already crowned with four golden records and surely considered as one of the most striking bands of the scene.

Although this is just the beginning, only a fragment of all the star-performers to be announced later, it is already clear that music fans from all over the world will have a great time at Sziget Festival also this year.

Last but not least, another great piece of news: you can buy your Sziget Festival tickets in 2011 for the same price you did last year. Early bird weekly tickets (including camping) are available for 170 Euros till 30 April and if you are not the camper type you can buy a non-camping weekly for 140 Euros. The prices will go up 30 Euros each after the early bird period is over, so it does make sense to think ahead. Daily tickets will be available for 45 Euros. 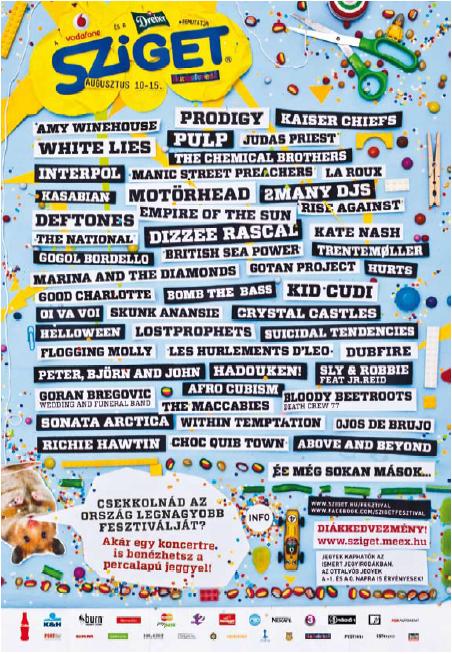