Warsaw suddenly became wrapped up in snow and cold. In such circumstances the student festival URSYNALIA Winter Edition in the Palladium club became the place to keep away from the cold, the place where live music warmed the hearts of rock fans.

Before the gig the concert goers were warming themselves up with beer. After 6PM the doors to the venue opened, and the fans, hungry for music and adrenaline, ran fast to get themselves closer to the stage and closer to their idols.

While waiting, we heard a few Rammstein tracks, and after a small break the polish band CARRION appeared on stage. The crowd didn’t need much to get worked up – they were dancing, screaming and singing along to CARRION with their second song, and some had already started to mosh.

Live, the songs sounded heavier and stronger than the studio versions - perhaps hearing them so loud created that impression. But the strong bass-lines and rhythms, that seemed to beat in sync with the heart, are really noteworthy.

After a few more songs the crowd were quite ready for the main heroes of the night, but they still didn’t let the polish band go without an encore.

Their last powerful number being the cover version of Depeche Mode’s “Enjoy the Silence”, CARRION left the stage.

The pit went calm for some time, getting a chance to rest, have a cigarette or a beer.
And show continues...

After the pause the stage was occupied by a Danish synth-rock band Turboweekend, who didn’t quite fit onto the bill genre-wise. Nevertheless, the vocalist Silas, having had a few polish beers beforehand, was quite ready for the task of winning the audience over.

At first the crowd was not too keen on the rock-trance rhythms of Turboweekend, especially after the heaviness of CARRION. But a few songs in, they really got into it.

When Silas said: “You have the last chance to represent Poland!” - , the room exploded with energy. Silas interacted with the audience in English, and said that their first visit to Poland turned out to be very enjoyable. The crowd loved Turboweekend and demanded an encore.

The Marshall speakers were moved closer to the moshpit as the black backdrop with Sum 41 written in red appeared.

The roadies were moving hurriedly, tuning up guitars, while the crows chanted “Sum 41”.

At the first chords the crowd exploded, and just then appeared Derek. From the first song onwards the audience screamed, yelled, everyone tried to get closer to the stage, the girls were going crazy. The fans were ecstatic, some – even orgasmic. They didn’t need to be warmed up – they were already aflame with excitement.

But Derek still decided to play a game and test, who screamed louder – and the crowd screamed as loud as they could! But that was only the beginning. Derek asked if anyone wanted to go up on stage, and that’s when the crowd exploded! The bravest fans tried to get there themselves, and security had a hard time controlling the most eager of them. A few people crowd-surfed their way to the front of the moshpit, where they were thrown right under the stage. In the end, two girls and one guy chosen by Derek were lucky enough to get on stage and be there with the band.

The hits like „We're All To Blame”, „My Direction”, „Walking Disaster”, „Fat Lip” and „Skumfuk” had the crowd euphoric. They also got to hear a new song from their as of yet unreleased album „Screaming Bloody Murder” (it comes out in February 2011).

This was one hell of a show – fragments of Iron Maiden’s „The Trooper”, Metallica’s „Master Of Puppets” melded into Sum 41 songs, pickers thrown around and fans desperately attempting to catch them, crazy moshing in the centre of the pit, the last drum solo by Derek, drumsticks flying into the crowd – that’s how Sum 41 are!

The Warsaw show was the last one of The Antidote Tour. Lasting for about 5 hours, it became a hot volcano in the middle of frozen Warsaw, a volcano bursting with drive, euphoria and rock’n’roll! 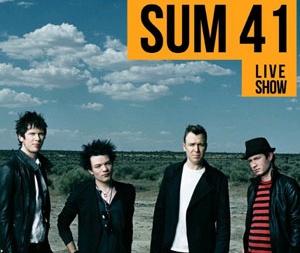 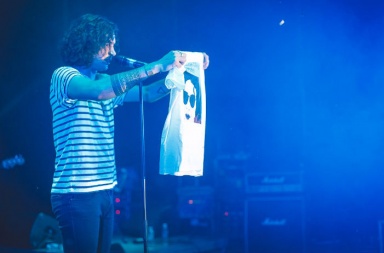