QUEENS OF THE STONE AGE are one of the headliners of this year’s edition of Orange Warsaw Festival 2014. The band’s performance is scheduled for Friday, June 13th.

QUEENS OF THE STONE AGE is a band that does not need an introduction. Created by Josh Homme and inspired by the likes of Cream or The Doors, the band is still experimenting with new sounds and arrangements. Their performance during Orange Warsaw Festival 2014 will be a part of the band’s European tour promoting their most recent release – “Like Clockwork”.

SNOOP DOGG aka SNOOP LION is another act announced for this year’s edition of Orange Warsaw Festival. The artist will perform on Warsaw Stage on Friday, June 13th.

Snoop Dogg aka Snoop Lion is multi-platinum artist and entertainment icon. With over 20 years in the industry, Snoop’s ability to stay at the forefront of popular culture and new technology through hit records, brand partnerships, innovative digital strategies, philanthropy and more has resulted in unwavering relevance. Most recently, Snoop has been making headlines with his upcoming REINCARNATED project and announcement of his new moniker, Snoop Lion – which has been the most controversial journey of a modern day icon.

One of the most legendary American independent bands – PIXIES – will perform during Orange Warsaw Festival 2014. Their performance is scheduled for 13th of June, during the first day of the Festival.

After over 30 years of existence, PIXIES are among the most iconic indie bands. They were the ones who inspired Kurt Cobain to write Nirvana’s biggest hit – “Smells Like Teen Spirit”. Their rich combination of punk and surf-rock along with distinctive dynamic of their tracks create a combination that was praised by many, including Tom Yorke from Radiohead, Bono and PJ Harvey. Even though the band has only released five studio albums, each and every one of them is unique and together, they create a new chapter in rock history. 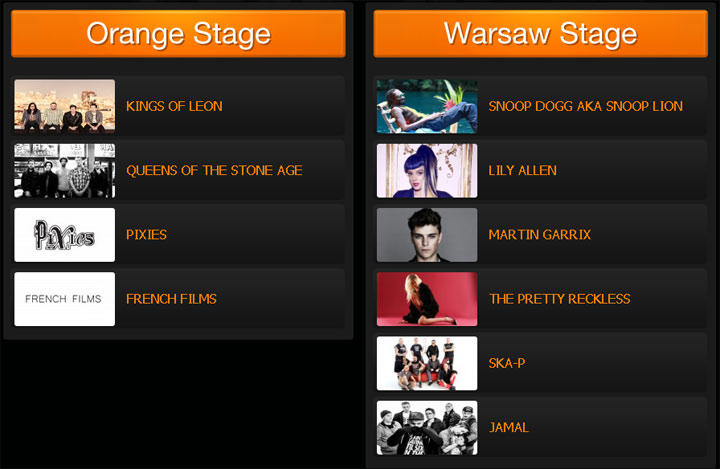 THE KOOKS are back to the studio and we can expect that they will present some new songs during their concert at Orange Warsaw Festival. The band will play before Florence and the Machine at Orange Stage.

FLORENCE AND THE MACHINE will be the headliner of the second day of Orange Warsaw Festival 2014!

FLORENCE AND THE MACHINE are an English indie rock band, consisting of lead singer Florence Welch Isabella “Machine” Summers and a collaboration of other artists.

The band’s first album, Lungs, was released on 6 July 2009, and held the number-two position for its first five weeks on the UK Albums Chart. As of October 2010, the album had been in the top forty in the United Kingdom for sixty-five consecutive weeks, making it one of the best-selling albums of 2009 and 2010. The group’s second studio album, Ceremonials, released in October 2011, entered the charts at number one in the UK and number six in the US.

One of the best DJs and producers in the world will perform the third day of the Orange Warsaw Festival 2014 – DAVID GUETTA’S show is scheduled for Sunday, 15th of June. 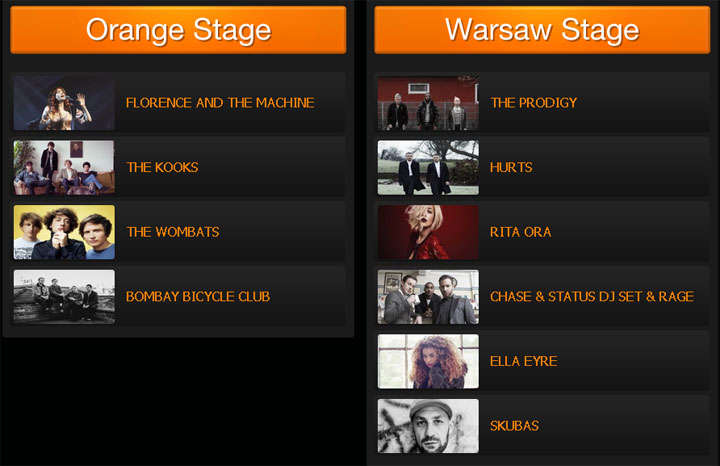 DAVID GUETTA is, undoubtedly, one of the biggest names on the international house music scene. In 2011, he’s been voted #1 DJ in “DJ Mag Top 100 DJs” fan poll. His impressive list of collaborations include acts such as Madonna, Snoop Dogg, Rihanna, Jay-Z, Chris Martin, Pitbull, David Bowie, Timbaland, Lady Gaga and 50 cent. Until now, GUETTA has sold more records than many popstairs and his shows sell out instantly.

KASABIAN is another act to perform during Orange Warsaw Festival 2014. The band’s performance is scheduled for Sunday, June 15th.

Kasabian is one of the most notable british rock bands, most known for their 2004 single “Club Foot”. During their 10 years of activity, the band have released 4 studio albums, with the most recent one – “Velociraptor!” – in 2011. They’ve just finished recording another longplay – scheduled for release in June 2014 so their performance during the Festival will be among the first ones with new material.

American hip-hop duo – OUTKAST – is returning on stage and will appear on Orange Stage on 15th of July. This performance will be a part of the band’s world festival tour celebrating 20 years of existence. This will be their first concert in Poland. 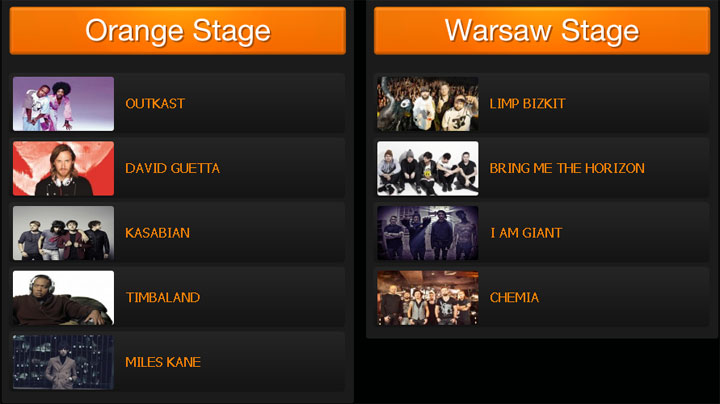