Orange Warsaw Festival 2009-2013 – music changes with Orange! Music, next to film and sports, is one of the strategic areas of Orange sponsoring activities. As a respected culture patron in Poland, Orange undertakes a number of initiatives related to music and engages in high quality global projects. Thanks to Orange brand music lovers in Poland has a chance to participate in concerts of such stars as Sting, Seal, Grace Jones and George Michael.

Orange Warsaw Festival is the most important project of Orange in the area of music sponsoring – it is one of the largest music events in the capital of Poland. Since the first edition of the festival, the Orange brand ambition is constant development of the event. The goal is to establish as the top music event in Europe.

Two first editions took place at the Defilad Square in the center of Warsaw. In 2011 and 2012 the festival was held at the modern Legia Warszawa Stadium. Since 2009 we have had a chance to listen to great artist as Linkin Park, The Prodigy, MGMT, Moby, Jamiroquai or Calvin Harris.

It is essential for us that each and every Orange customer could observe and confirm that music changes with Orange.

More info and tickets on: http://orangewarsawfestival.pl/en/tickets 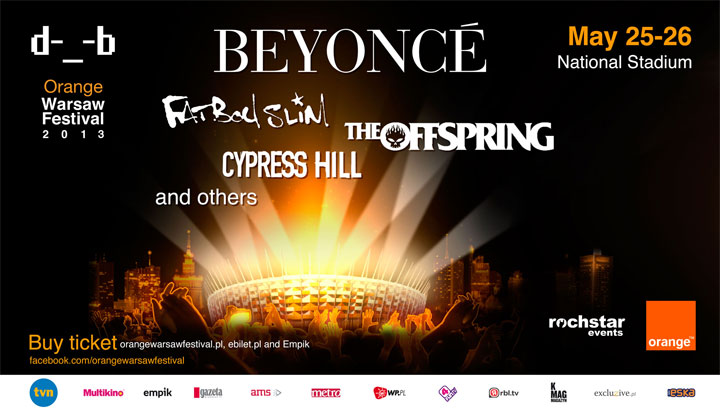