One of the biggest rock bands on Earth will headline 3rd day of the festival. Muse will perform at Sluzewiec Horse Racing Track on June 14th. Other confirmed acts for Orange Warsaw Festival 2015 are The Chemical Brothers, Asking Alexandria, Mela Koteluk and Kadebostany.

MUSE have released six studio albums and have sold in excess of 20 million albums worldwide. Widely recognised as one of the best live bands in the world, they have won numerous music awards including five MTV Europe Music Awards, six NME Awards and six Q Awards. The have twice been awarded Best British Live Act at The Brits and have also been nominated for five Grammy Awards, wining Best Rock Album for The Resistance.

Their last tour commenced in October 2012 and saw the band perform to over 2 million fans worldwide. Muse's sold out show at Rome's Olympic Stadium in July 13 was the first concert film to be filmed and presented in 4K Ultra High Definition. The band are currently in the studio working on their seventh studio album, scheduled for release in 2015.

For the past twenty years, THE CHEMICAL BROTHERS have redefined the idea of live electronic music. In that time, their live show has evolved from humble beginnings in dank London nightclubs into one of the most in demand festival headline sets in the world. All the while, it has adhered to the same basic idea: that the gig should create its own transcendent audio/visual space where the audience can lose themselves for the duration of the set.

The Chemical Brothers ongoing relationship with director and visual artist Adam Smith continues to produce hallucinogenic results across the globe (as seen in 2012’s collaborative concert film Don’t Think). The band are due to release their eighth studio album in 2015.

ASKING ALEXANDRIA is a british metalcore band from York. The band was created in 2008 when the guitarist, Ben Bruce, came back from Dubai to Great Britain. Asking Alexandria’s sound is described as metalcore mixed with heavy metal and electronic elements. As a main inspiration, Danny Wornsnop describes the band Aerosmith.

Their first studio album Stand Up and Scream was released in 2009 by an American independent label Sumerian Records. Their next release – album Reckless & Relentless came out in April 2011 and debuted on the 9th position of Billboard 200 chart and was listed in Top 5 Rock Albums by Billboard Magazine. The album was also appreciated in the UK where it reached 7th position on the UK Rock Chart. Their most recent release is the 2013 album From Death to Destiny.

MELA KOTELUK is a polish vocalist and lyricyst. Her debut album Spadochron, was released in 2012 quickly became a massive commercial success and reached Platinum Album sales award. The album contains twelve tracks, combining pop with an alternative sound. Her debut album was appreciated by critics and received two Fryderyk Awards 2013 in Album of the Year and Debut of the Year categories.

On 17th of November 2014 Mela released her second album Migracje. It was promoted by the single and a videoclip Fastrygi. Migracje is a combination of indie compositions with unique lyrics. The album contains the sound of a very rare instrument, called the hang drum. The songs are also featuring the sound of a chello, flute, saxophone and clarinet.

KADEBOSTANY is a band formed in 2008, rapidly storming the world of pop music. According to their own sources they originate in the small European republic of 'Kadebostan' and they represent the nation worldwide. They have swiftly catapulted themselves into the spotlight with their irresistible blend of pop music mixed with sometimes contradictory influences. A striking visual identity and their infamously powerful live performances backed by an exclusive visual show perfect the experience.

In 2011 the band released a first album and immediately launched a first assault on the international audiences with a string of over a hundred acclaimed live gigs around the globe. Armed with this initial success, the band have started working on their second album and in 2013 they have released their second album Pop Collection. The release, promoted by the single Walking With a Ghost, clearly shows the direction the artists are going. The release was also appreciated by the critics, resulting in three nominations to Swiss Music Award. 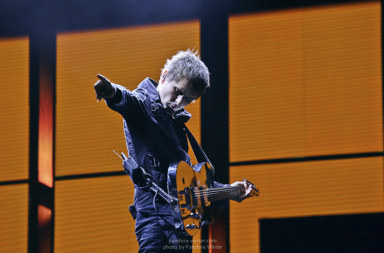 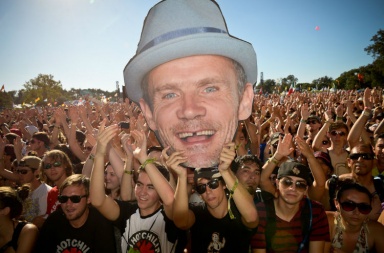