This band is well-known amongst fashionistas and youngsters who closely follow new trends in electronic music. Midnight Juggernauts are very busy these days: they travel with concerts around the world, have performed at the largest U.S. festival Coachella and are perceived as the most extensively touring Australian band.

The band members Andrew Szekeres (guitar, keys), Vincent Vendetta (keys, vocals) and Daniel Stricker (drums) became known among the music fans for their track Shadows, which became popular on the Internet in 2006 and attracted many Australian and European labels and clubs.

I would like to note that this is justified: this song sounds amazing, especially live – it drives the audience crazy with the first notes of its groovy bass line. Many fans were looking forward to this concert, and Midnight Juggernauts did not disappoint them.

Overall, the entire event was delayed for an hour: at 21:00, when the concert was supposed to begin, people were still standing in front of the Crystal Hall entrance. The support act for Midnight Juggernauts was the French band Silvervince, which was recently joined by Yuriy Hustochka. They left an ambiguous impression upon the public – very simple lyrics, the essence of which could be understood even by non-French speakers, two girls who danced seductively and shouted into the microphone, cute and comic frontman with sideburns, wearing a top hat, tuxedo and a silver scarf – it all seemed fun, but a bit inappropriate at the same time.

When the Australians took to the stage and opening chords were played, all uncertainty had disappeared.

The charismatic vocalist Vincent, multiinstrumentalism of the each band member, emotional involvement and drive defined Midnight Juggernauts' gig in Kyiv.

From the second song, which was Shadows, the room just exploded.

This song has one of the finest bass lines I have ever heard – it was impossible not to dance. Maybe the bass sounded so impressive because the other instruments sounded not so good, especially vocals and synthesizers. Sometimes it was a disappointment not to be able to percept notes, harmonies and melodies and not to be able to hear what the singer was saying off the stage.

According to what I could understand, the guys liked Kyiv very much, they were looking forward to staying here for a little 2-day holiday and asked the audience to recommend places worth visiting.

The excitement and adoration passed from the audience to the musicians – you could tell that they were enjoying every second of it. Apart from the electronic and dance music vibe, you could hear 70s art rock's influences in Midnight Juggernauts' music. Synth and organ-like sounds reminded me of the early Pink Floyd records or Roxy Music. A particularly strong association with Roxy was brought out by the band's tour manager, who played a saxophone solo on one of songs. Everyone happily welcomed Into The Galaxy, I was looking forward to Vital Signs, which you could hear a lot this year, but it was difficult to distinguish the melody, so the experience was a bit ruined.

However, the feedback to every song was incredible. Rhythm section did their job despite all the problems with the sound. It was nice to see Yuriy Hustochka with the guys from Silvervince having fun together with everyone else, and to see Alina from Singleton in the audience.

On their website the guys mentioned that they always wanted to visit Ukraine. After the gig there was a feeling that everybody enjoyed the evening - both musicians and fans. We hope that Midnight Juggernauts will have a great time during their Kyiv holiday and will come back here again. 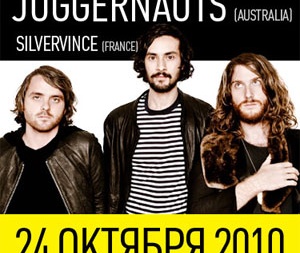